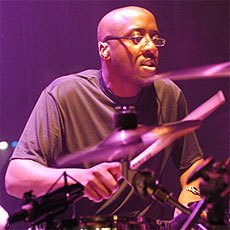 Andrew started trying out guitars, bass and keyboards in his local church, before settling with the drums. After dabbling for some time Andrew became serious at the age of 19 studying music at Middlesex University. The major turning point was training under the great Bob Armstrong, who has remained influential in his approach.

He is now one of the UK’s top session players renowned for his deep soulful playing. Today, Andrew is as busy as ever, he has played with Massive Attack, Des’ree Jamelia and more recently as Musical Director for Kylie Minogue’s tour.